Your Moment of Zen

Entertainment while we put the finishing touches on the finale to the Greek dinner party arc.

On the Way to the Market 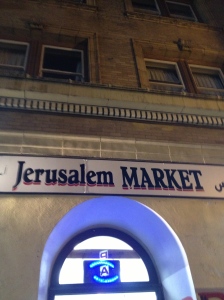 Shopping for a dinner party is easily one of the most tedious party of throwing a dinner party (only beaten by washing dishes). However, we just realized that thinking about it differently, framing it as a quest for ingredients can make it an adventure. For the Greek party, based on Googling, there wasn’t a clear winner for one store where we could get all of the ingredients we needed.

After dinner where we were brainstorming the Greek dinner, we walked by Jerusalem Market by chance. Amazingly, it’s open till 10 pm. We took a quick look and liked what we saw so we bought phyllo for the Baklava prototype. They had at least three types, and the owner advised us which one was best for dessert. He was shy at first, but he and his wife turned out to be super helpful. The store is compact, but they have a full range of Middle Eastern products.

We returned for the lamb. I called the Friday before the dinner party (last minute, I know), and they had just gotten their lamb in that morning. They also butcher it for us on the spot (two legs-one on the bone and the other butterflied. It was a little surreal to see the owner’s wife sawing the leg of lamb on a Friday night when we’d normally be at a bar. By that time, they knew were serious about cooking and offered us the bones for stock. We also managed to sneak in a couple questions about Baklava, and bought a piece of their pre-made version for a dollar in order to compare.

I also bought a jar of tahini. Their smallest jar looked so big to me. I thought it was a lifetime supply. We ended up running out during the dinner party. Shows you how much we know about Greek food. So, it looks like I’ll be back in the near future.

Final note, there’s a market on 22nd and Irving with Greek owners that I wanted to try, but they don’t sell meat. Another party, another time!

The menu kept on evolving, until the very end. A combination of timing, availability of ingredients, and last-minute realizations kept everything up in the air, but here’s what was served in the end: 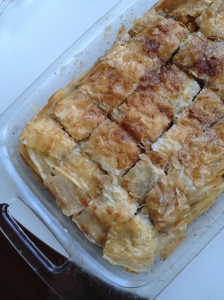 I’ve only had baklava a few times in my life, but my memories of it was that seems so delicate. I was hesitant to make it since I’m a stranger to baking, but this blog is all about new challenges. When I surreptitiously got the recipe over a conversation at a bar, I walked home in the rain and immediately grabbed a notebook and started jotting down what I could remember.

All of the dishes on the menu were new to me, but most the techniques felt familiar. However, baklava seemed to require some prototyping love. Luckily, my co-workers were eager taste test subjects.

–The key: I was told that the most important thing was to take the syrup off the heat before pouring it over the baklava. When, pouring, the baklava should be hotter than the syrup.

–Cutting the baklava before pouring the syrup creates more crevices that will soak up the syrupy goodness.

–Measure once, cut twice. When prototyping, I didn’t cut the phyllo cleanly. This ended up causing one side of the phyllo to snag and slowed down the process.

–Layers upon layers. There seemed to be a lot of variation in the number of layers you put between layers of nuts. I ended up feeling that eight as the base and four for each intermediate layer and eight on top was the right number.

–Painting Paula Deen style. Everyone who gives you a baklava recipe stresses that you have to butter each layer of phyllo which is the painstaking part. A few drinks and a movie in the background helps those who are attention-impaired like me.

-Nuts. I think I originally over-thought the exact nut mixture to use. 60% walnuts, 30% almonds, 10% pistachios? I ended up realizing it doesn’t matter too much. For me, baklava is more about the texture.

Overall, I think baklava is not too tricky as long as you buy good phyllo and are somewhat patient. One final prototyping note: I should vary a couple of parameters like amount of cinnamon/syrup/number of layers to maximize what I learn from each cooking experiment.

It’s Greek To Me

The first Project Dinner Party is under way! With a list of 99 dinner parties, there was a bit paradox of choice at play, and it was a little hard to chose where to start. I wanted an idea that I wasn’t too attached to since the first attempt at any new project comes with wrinkles. I also wanted something challenging but not overwhelming.

I came up with a shortlist and Derek mentioned that March 25th, the same week we were thinking of was Greek Independence day. That seemed like just the right amount of serendipity. So Greek it is!

Confession before we go too far down this road: I have yet to visit Greece and probably had Greek food only a handful of times. However, I feel that having some experience with Mediterranean flavors in general and having several good resources to consult has brought me up to speed in a relatively short period of time. We’ll see in due time, right?;)

Greek has turned out to be a good theme to start with since Greek food has a distinct flavor profile but the component flavors are not too foreign (lemon, oregano, and cinnamon to name a few). Thus, the research was not too unwieldy. Plus, I had a cookbook (How To Roast a Lamb) that I bought a while back but hadn’t had a chance to play around with.

Inspirations for this party:

The idea for this blog was born from the twin realizations that:

Being the engineer that I am, I instantly started a spreadsheet to track and categorize my ideas. Over three days, I generated 99 ideas for dinner party themes. While many of these will never see the light of day, I think that brainstorming as many ideas as possible will lead to more creative ideas actually making the cut.

Without any further ado, I look forward to sharing my dinner parties, one dinner party at a time!